Scientists Discover Golden Asteroid That Could Make Every Human Being On Earth A Billionaire . 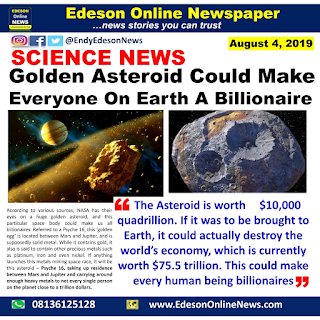 According to various sources, NASA has their eyes on a huge golden asteroid, and this particular space body could make us all billionaires. Referred to a Psyche 16, this ‘golden egg’ is located between Mars and Jupiter, and is supposedly solid metal.


While it contains gold, it also is said to contain other precious metals such as platinum, iron and even nickel. The Sun reports that it’s estimated total worth is a whopping $10,000 quadrillion. If the asteroid was to be brought to Earth, it could actually destroy the world’s economy, which is currently worth $75.5 trillion.
If anything launches this metals mining space race, it will be this asteroid – Psyche 16, taking up residence between Mars and Jupiter and carrying around enough heavy metals to net every single person
on the planet close to a trillion dollars.
The massive quantities of gold, iron and nickel contained in this asteroid are mind-blowing. The discovery has been made. Now, it’s a question of proving it up.
NASA plans to do just that, beginning in 2022.
Of course, says veteran miner Scott Moore, CEO of EuroSun Mining “The ‘Titans of Gold’ now control hundreds of the best-producing properties around the world, but the 4-5 million ounces of gold they bring to the market every year pales in comparison to the conquests available in space.”
In the decades to come, if you want to be a gold titan, you’ll have to get your feet off the ground. The real titans will be far from Earth. Moore should know: He heads up a junior mining company that is seeking a seat at the titan table with the biggest in-development gold mine in Europe.
Can we actually extract this space gold? That is the quintillion-dollar question, certainly.
Speaking to Outerplaces, Professor John Zarnecki, president of the Royal Astronomical Society, estimates that it would take around 25 years to get ‘proof of concept’, and 50 years to start commercial production.


GUYS, WITH THE DISCOVERY OF THIS GOLDEN ASTEROID, WE WILL ALL BE RICH AND BE BILLIONAIRES. NO ONE WILL BE POOR.
GUYS, WHAT DO YOU THINK?

Kingsley Abuchi David and 41 others

if everybody is a billionaire? Who will farm, who will do the labour?? Who will work for money??.. will you

Let it come down what are they waiting for

All be rich? Totally not possible

What's are they still waiting for? They should do the needful cause me need the money now to support my business

I want to be rich

We will all be billionaires? This is a fallacy.

And which country will make the first move to make every human on earth a millionaire? Pls let's stop deceiving ourselves biko

OK i want to get iy

Fhada lawd any power holding my asteroid, fall down and die😡😡😡😡