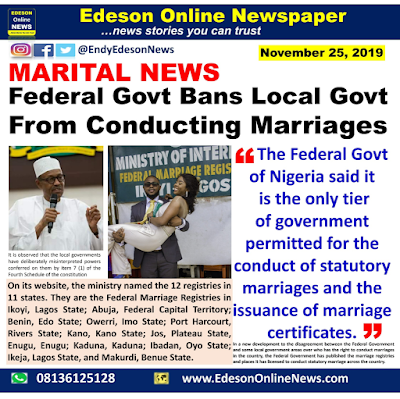 
On its website, the ministry named the 12 registries in 11 states. They are the Federal Marriage Registries in Ikoyi, Lagos State; Abuja, Federal Capital Territory; Benin, Edo State; Owerri, Imo State; Port Harcourt, Rivers State; Kano, Kano State; Jos, Plateau State, Enugu, Enugu; Kaduna, Kaduna; Ibadan, Oyo State; Ikeja, Lagos State, and Makurdi, Benue State.
In an advertorial titled, ‘Public notice on conduct of statutory marriage’, in a newspaper on Wednesday, the Interior Ministry said, “The attention of the Ministry of Interior has been drawn to the publication in the PUNCH Newspaper of Friday, 13th September, 2019, page 42 under the caption, ‘Marriage: Ignore FG’s directive, LGs tell organisations’.
“The Ministry of Interior is therefore constrained to issue this notice in order to properly guide the public on the issue of Statutory Marriages under the applicable law in Nigeria.”
The ministry explained further that it had the responsibility for granting licences to qualified places of worship as well as LGAs that compiled with the provisions of the Act (Sections 4(2) & (5) of the Marriage Act), adding that the ministry had the responsibility to appoint officers to serve as registrars in the Federal Marriage Registries.
The public notice added, “It is observed that the local governments have deliberately misinterpreted powers conferred on them by item 7 (1) of the Fourth Schedule of the constitution.
“For the avoidance of doubt, item 7(1) states that the functions of the Local Government include: registration of all births, deaths and marriages. This provision is clear and requires the local government councils to maintain registries to register births, deaths and marriages for record purposes and planning.”
The ministry, however, warned that any statutory marriage conducted in breach of the Marriage Act, CAP 218, Laws of the Federation 2004 would not serve the desired purpose.
GUYS, WHAT DO YOU THINK?
....................................
LINKS YOU MIGHT LIKE
For more News visit my blog
www.edesononlinenews.com
Or Know About My Services by
Visiting my Company Website
www.edesoninfotech.com.ng
I am also a Website Designer.
Call me to design your website: 08136125128
....

Ajali Agatha and 3 others

We are talking that their are surplus and excess work at the centre and you people are still adding to it.

It means I can't go to the registry next to my house to get married except Ikoyi and Ikeja?
Posted by Endy Edeson