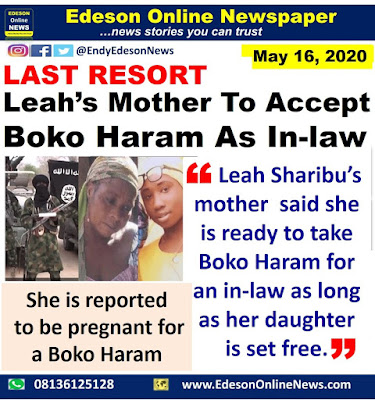 For a mother whose daughter has remained in captivity on account of refusal to renounce her faith, even after her fellow abductees have been set free, and who is alleged to have been impregnated by one of her captors, nothing would be too much to bear, including having to accept one of the captors as an in-law.
Leah Sharibu’s mother is willing to go down this route just to secure the release of her beloved one.As her daughter turned 17 last Thursday, May 14, and marks her third birthday in captivity, Mrs. Rebecca Sharibu, mother of Leah Sharibu, the only Chibok schoolgirl still in Boko Haram captivity, said she was ready to take an outlaw for an in-law as long as her daughter is set free, just as she expressed disappointment with the federal government’s unending negotiation for her daughter’s
release, describing it as “a scam to satisfy themselves.”

Leah is the sole Christian among 110 schoolgirls abducted by the Islamic State West African Province (ISWAP) faction of Boko Haram from their school in Dapchi, Yobe State, on February 19, 2018.
While her surviving classmates returned a month later, following government negotiations, she was allegedly denied freedom for refusing to renounce her Christian faith and convert to Muslim as a precondition for her release. She has been in captivity ever since.
In February this year, her mother joined a protest outside the Nigerian High Commission in London, the United Kingdom (UK) to mark the second anniversary of her abduction and delivered a petition with 12,132 signatures to the High Commission, calling on the Nigerian government to take action to secure Leah’s release.
In a brief encounter with NEWSMEN yesterday, Rebecca lamented the continuous absence of Leah, saying time for selection or option has either passed or not yet, and “all that matters now is the safe arrival of my precious Leah.”
Recalling that Leah has spent two years and two months in Boko Haram clutch, the devastated mother said she was ready to take even BOKO HARAM for in-law rather than lose her daughter, saying: “You may call him an outlaw, but to me, her husband will be my son. I will take and treat him as an in-law.”
GUYS, WHAT DO YOU THINK?
...................
LINKS YOU MIGHT LIKE.
Kindly Visit My Blog For Latest News,
Entertainment, Video Documentaries
www.edesononlinenews.com
.........
I AM ALSO A WEBSITE DESIGNER.
CALL OR WHATSAPP ME TO DESIGN
YOUR WEBSITE 08136125128
...........
You Can Visit My Company Official Website To Learn More About My Products And Services
www.edesoninfotech.com.ng
............

Joy Isaac and 11 others

May Allah help this poor woman. So painful but u will have ur daughter alive. Ameen

Mamma,so sad about your predicament but this is the Naija we now live in. One day na one day sha, you will hold Leah in your bosom again! Keep faith!

Endy is it chibok?

HMMMMMMMMMMMMMMM, IT IS NOT EASY TO LOSE UR CHILD LIKE THAT.
Posted by Endy Edeson