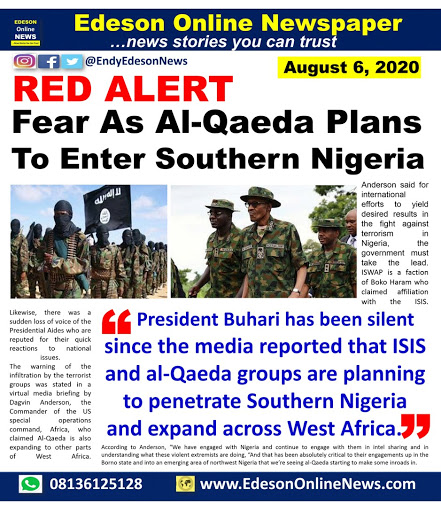 The Nigerian President, Muhammadu Buhari, and the Nigerian Army Headquarters have been silent since the media reported that ISIS and al-Qaeda groups are planning to infiltrate Southern Nigeria and expand across West Africa. Likewise, there was a sudden loss of voice of the Presidential Aides who are reputed for their quick reactions to national issues.

The warning of the infiltration by the terrorist groups was stated in a virtual media briefing by Dagvin Anderson, the Commander of the US special operations command, Africa, who claimed Al-Qaeda is also expanding to other parts of West Africa.

According to Anderson, “We have engaged with Nigeria and continue to engage with them in intel sharing and in understanding what these

“And that has been absolutely critical to their engagements up in the Borno state and into an emerging area of northwest Nigeria that we’re seeing al-Qaeda starting to make some inroads in.

“So, this intelligence sharing is absolutely vital and we stay fully engaged with the government of Nigeria to provide them with an understanding of what these terrorists are doing, what Boko Haram is doing, what ISIS-West Africa is doing, and how ISIS and al-Qaeda are looking to expand further south into the littoral areas.

“Anderson regretted that despite successes recorded in previous years, there has been a setback, adding:

“We as a community of international nations, keep thinking we have defeated them or we have put them on their back foot and that they’re just moments from disintegration,”

Anderson said for international efforts to yield desired results in the fight against terrorism in Nigeria, the government must take the lead.

Recall, following the index case of the coronavirus disease (COVID-19) in Nigeria, it took the president about one month before addressing the nation. This was done after lots of criticism from citizens.

The Nigerian Military official websites, social media pages, were also void of any statement on the latest report of the probable invasion of southern Nigeria by the terrorist groups.

It was reported in June that fighters from the Islamic State West Africa Province (ISWAP) in trucks fitted with machine guns attacked a military base in Auno, a village that is 25 kilometres (15 miles) from Maiduguri, the capital of Borno state, killing six soldiers.

ISWAP is a faction of Boko Haram who claimed affiliation with the ISIS.

Patrick Chibuike Uwakwe and 39 others

They should go to Aso rock

They’re welcome, then we will show them is not how they drink water, they drink pepper Soup

Let them come, and we will surely teach them that it is not all river that crab can venture into cos we have ordinary and Hot water.

They we all dead. by the millions population of Nigerians, we'll defend our territory' our country. without waiting for buhari government.say no terrorist

THEY ARE WELCOME, TO COME AND KILL COW

We all know infiltrating the South won't be possible... We will fight to the last breath to make sure this idiots don own our soil...

Why would Bubu do anything about it? Is he not the one that is inviting them indirectly??...
Someone that "Rehabilitates" "Ex-Boko Haram" members for them to return back to their activities!...smh
Offcourse alqaeda has seen how nonchalant Nigeria is as regards insurgency and is cashing in on it!...

After opening borders last year and encouraging his Fulani brothers to come in, what else would Buhari and his cohorts say? It's all part of the plan