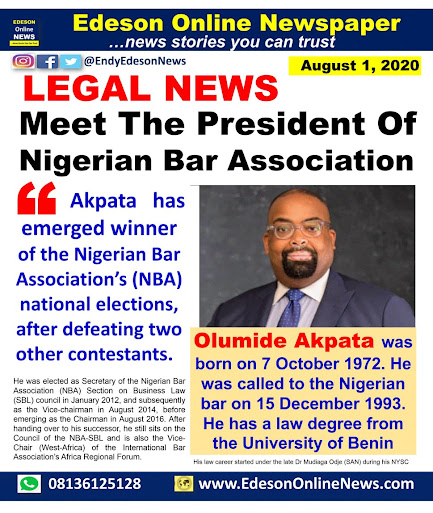 Olumide Akpata has emerged winner of the Nigerian Bar Association’s (NBA) national elections, after defeating two other contestants who are Senior Advocates of Nigeria (SANs). This victorious win makes him the NBA’s first non-SAN President in years.

Olumide Akpata was born on 7 October 1972 and attended the prestigious King’s College in Lagos. He was called to the Nigerian bar on 15 December 1993 after obtaining his law degree from the University of Benin the previous year.

His law career started under the late Dr Mudiaga Odje (SAN) during his National Youth Service Corps (NYSC), before joining Templars shortly after it was established.

He has spent over two decades practicing with Templars, and is currently Senior

After handing over to his successor, he still sits on the Council of the NBA-SBL and is also the Vice-Chair (West-Africa) of the International Bar Association’s Africa Regional Forum.

Oluebube Prince and 44 others

Who this one want to help biko.

Congratulations to my lordship is a good record

Ahmed Dankano He is qualified for the position . What makes you think he can't help anyone ?
Ahmed Dankano replied · 1 reply

My elder brother told me he was going to defeat the other two SANs, but I doubted it, now it's very clear.
Congratulations to him!

Eze Osimiri Yeah, Olumide did lots of campaign. I know your elder brother is also a barrister. Did he also vote?

Congratulations to him. But can his body size allow him to effectively and efficiently carryout his duties? Only time shall tell. I wish him god luck