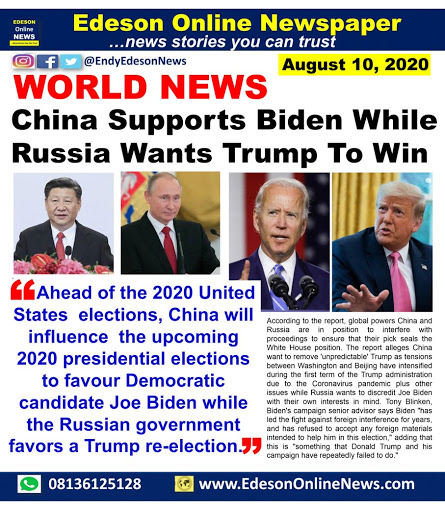 According to a new intelligence report by the US intelligence agencies released on Sunday, August 9, China will influence the upcoming 2020 presidential elections to favour Democratic candidate Joe Biden while the Russian government favors a Trump re-election.

According to the report, global powers China and Russia are in position to interfere with proceedings to ensure that their pick seals the White House position.

The report alleges China want to remove 'unpredictable' Trump as tensions between Washington and Beijing have intensified during the first term of the Trump administration due to the Coronavirus pandemic plus other issues while Russia wants to discredit Joe Biden with their own interests in mind.

"Ahead of the 2020 US elections, foreign states will continue to use covert and overt influence measures in their attempts to sway US voters' preferences and perspectives, shift US policies, increase discord in the United States, and undermine the American people's confidence in our democratic process," said William Evanina, who leads the National Counterintelligence and Security Center.

Evanina also said that tactics that could be used, as well as the spread of disinformation and propaganda, include attempts at compromising equipment used in the election. This could be either to alter the result in their favor or to give a false impression that the results have been tampered with.

While speaking to congress, she also revealed another player in the up I ng elections was Iran, saying the Islamic Republic aims to spread disinformation to divide the country and hurt the chances of Trump to remain in power.

Trump's and Biden's campaign have both denied soliciting for foreign help.

Tony Blinken, Biden's campaign senior advisor says Biden "has led the fight against foreign interference for years, and has refused to accept any foreign materials intended to help him in this election," adding that this is "something that Donald Trump and his campaign have repeatedly failed to do."

John Bosco Joseph and 56 others

Both countries are invited by Trump

I knew it will come to this

The both of them are white supremacist...
Ready to uphold the KKK values of the american confederate!
They are both evil....blacks need to wake up on 'Trump' or 'Biden' being their saviour!

I support anyone that win

Let's see how it unfolds

Are they coming to vote... Because Trump call Covid 19 Chinese virus
Posted by Endy Edeson