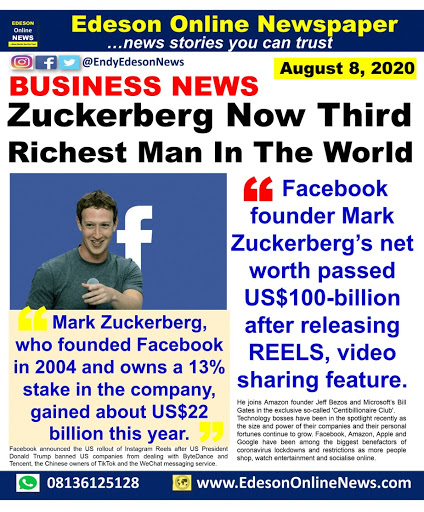 Facebook founder Mark Zuckerberg has seen his personal wealth rise to $100bn (£76bn) after the launch of a new short-form video feature. On Wednesday, Facebook announced the US rollout of Instagram Reels, its rival to controversial Chinese app TikTok.

Facebook shares rose by more than 6% on Thursday. Mr Zuckerberg holds a 13% stake in the company.
He joins Amazon founder Jeff Bezos and Microsoft’s Bill Gates in the exclusive so-called 'Centibillionaire Club'.
Technology bosses have been in the spotlight recently as the size and power of their companies and their personal fortunes continue to grow.

Facebook, Amazon, Apple and Google have been among the biggest benefactors of coronavirus lockdowns and restrictions as

more people shop, watch entertainment and socialise online. Mr Zuckerberg’s personal wealth has gained about $22bn this year, while Mr Bezos's has grown by more than $75bn, according to Bloomberg.

The short-form video feature Reels, which is seen as a rival to the controversial Chinese-owned TikTok platform, works within the Facebook-owned Instagram photo-sharing app.

The launch couldn’t have come at a better time for Mr Zuckerberg as late on Thursday Donald Trump issued an executive order to deal with what the US president called the "threat" of TikTok in the US.

So-called tech titans, including Mr Zuckerberg, have come under increased scrutiny from US and European lawmakers over allegations that their power and influence are out of control.

The five largest US tech companies, Apple, Amazon, Alphabet, Facebook, and Microsoft, currently have market valuations equivalent to about 30% of US gross domestic product (GDP).

US senator and former presidential hopeful Bernie Sanders this week unveiled a plan to tax what he called “obscene wealth gains” made by billionaires during the coronavirus pandemic.

The “Make Billionaires Pay Act” would tax 60% of the increase in a billionaire's net worth from from the start of the pandemic through to the end of the year.

Mr Sanders proposes that the tax revenue earned would go towards out-of-pocket health-care expenses for Americans.

Mr Zuckerberg has previously said he plans to give away 99% of his Facebook shares over his lifetime through the charitable foundation he set up with his wife Priscilla Chan.

Michael Nwabueze Nnajiaku and 61 others

Which day is he doing giveaway to us?

He has to be, because the way the guy is making money is too much💪🙏👍🤙😭

This is a good one

Mark Na theif if you know you know

Pandemic to many &plandemic to few,,Trump did well,how I wish dis can happen in naija,like govt using some tax measures to limit the excessive bank alerts of some of our ogas ontop.

And he can't even give us 2k each, na our data money na