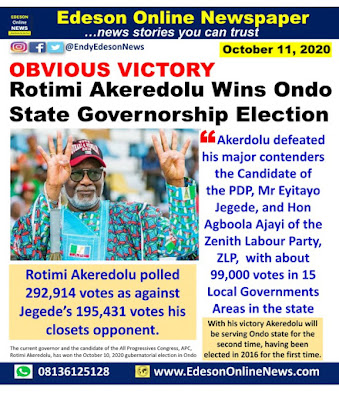 The current governor and the candidate of the All Progressives Congress, APC, Rotimi Akeredolu, has won the October 9, 2020 gubernatorial election in Ondo. Akerdolu defeated his major contenders the Candidate of the Peoples Democratic Party, PDP, Mr Eyitayo Jegede, and Hon Agboola Ajayi of the Zenith Labour Party, ZLP, with about ninty-nine thousand (99), votes in 15 Local Governments Areas in the state.

Akeredolu polled 292,914 votes as against Jegede’s 195,431 votes his closets opponent. the Independent National Electorl Commission’s Returning Officer, Prof. Idowu Olayinka, who declared Akeredolu winner, said he had met all conditions required to be returned as governor-elect for the state.
With his victory Akeredolu will be serving Ondo state for the second time, having been elected in 2016 for the first time.
He secured 244, 842 votes in 2016, defeating his closest rivalry Mr. Jegede who garnered 150, 380 votes.