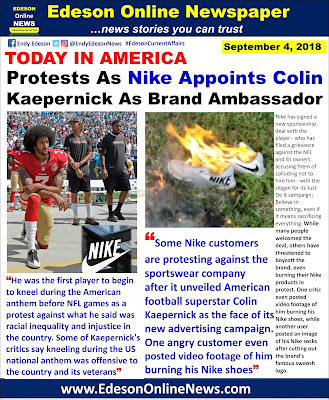 Some Nike customers have hit back at the sportswear giant after it unveiled American football star Colin Kaepernick as the face of its new advertising campaign. Kaepernick, a former San Francisco 49rs quarter-back, was the first player to begin to kneel during the American anthem before NFL games as a protest against what he said was racial inequality and injustice in the country.

Nike has signed a new sponsorship deal with the player - who has filed a grievance against the NFL and its owners accusing them of colluding not to hire him - with the slogan for its Just Do It campaign: Believe in something, even if it means sacrificing everything.
While many people welcomed the deal, others have threatened to boycott the brand, even burning their Nike products in protest. One critic even posted video footage of him burning his Nike shoes, while another user posted an image of his Nike socks after cutting out the brand's famous swoosh logo.

Kaepernick's kneeling protest has been copied by other NFL players and sports stars and led to Monday's announcement he was the face of Nike's new advertising campaign celebrating the Just Do It slogan's 30th anniversary. Some Americans immediately reacted in disgust, posting scores of pictures and videos online in a torrent of poorly-spelled and angry tweets.

Some of Kaepernick's critics say kneeling during the US national anthem was offensive to the country and its veterans. To show their objections, they posted videos and photos to Twitter of themselves cutting up Nike socks, setting Nike clothes and trainers on fire, or revealing that they will be boycotting the brand.

Prince Adebowale Adegunte and 9 others

FUCK ALL THE BIGOT PROTESTERS

Obanla: I think the protesters should be whites (majority).

Nike might drop COLLIN , their shares is down now following the protest

na him waste him money nw

They burned what they bought with their own money. I don't think they will drop him.

Nike already would've considered the implications before doing it.

The reason why Americans are annoyed is because they feel he disrespecting their military men and the flag and some (military guys) have spoken in support of him.

The fact that Trump had to get involved in the knee and don't take a knee issue says all about what the guy is fighting for.