10 Interesting Facts You Should Know About Lionel Messi 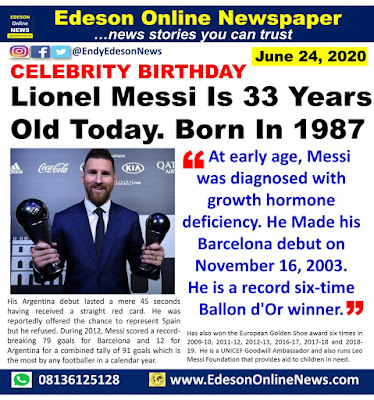 Football icon Lionel Messi is celebrating his 33rd birthday today. Born on 24 June, 1987 in Rosario, Argentina, Messi signed up with Spain's FC Barcelona at the age of 13 and has since become one of the greatest footballers to have played the game. Also Read - Happy Birthday, Lionel Messi: 10 Interesting Facts You Should Know About the Football Icon
The Argentine continues to set new benchmarks for the others to follow, some maybe untouchable. He overcame a potential career-threatening medical condition at a young age before he began his goalscoring spree and winning trophies both. Also Read - La Liga: Ivan Rakitic Strikes as Barcelona Beat Athletic Bilbao 1-0 to Reclaim Top Spot
Here we take a look at the 10 interesting facts from his personal and professional career: Also Read - La Liga: Real Madrid go Top of Standings After Beating Real Sociedad 2-1


1. He was born in Rosario which also the birthplace of famous revolutionary Che Guevara.
2. When young, Messi was diagnosed with growth hormone deficiency. However, after signing with Barcelona, the Spanish giants agreed to pay for his treatment.
3. Made his Barcelona debut on November 16, 2003 during a friendly against FC Porto and official debut on October 16, 2004 against Espanyol in a 1-0 win.
4. Became the all-time leading goalscorer in Barcelona history in March 2014.
5. His Argentina debut lasted a mere 45 seconds having received a straight red card. He was reportedly offered the chance to represent Spain but he refused.
6. During 2012, Messi scored a record-breaking 79 goals for Barcelona and 12 for Argentina for a combined tally of 91 goals which is the most by any footballer in a calendar year.
7. He is a record six-time Ballon d'Or winner.
8. Has also won the European Golden Shoe award six times in 2009-10, 2011-12, 2012-13, 2016-17, 2017-18 and 2018-19.
9. Won Olympic gold medal at the 2008 Beijing Olympics.
10. He is a UNICEF Goodwill Ambassador and also runs Leo Messi Foundation that provides aid to children in need.
GUYS, WHAT DO YOU THINK?
...................
LINKS YOU MIGHT LIKE.
Kindly Visit My Blog For Latest News,
Entertainment, Video Documentaries
www.edesononlinenews.com
.........
I AM ALSO A WEBSITE DESIGNER.
CALL OR WHATSAPP ME TO DESIGN
YOUR WEBSITE 08136125128
...........
You Can Visit My Company Official Website To Learn More About My Products And Services
www.edesoninfotech.com.ng
.........

Amoloye Ezekiel Oluwafemi and 14 others

That should be his football age dt old man

Happy birthday to you leo 🐐 goat

If I hear se i senior that short billy