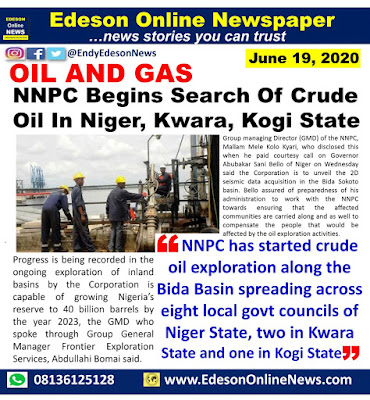 The Nigeria National Petroleum Corporation (NNPC) on Wednesday said it has commenced crude oil exploration along the Bida Basin spreading across eight local government councils of Niger state, two in Kwara state and one in Kogi state.
Group managing Director (GMD) of the NNPC, Mallam Mele Kolo Kyari, who disclosed this when he paid courtesy call on Governor Abubakar Sani Bello of Niger on Wednesday said the Corporation is to unveil the 2D seismic data acquisition in the Bida Sokoto basin.
Progress is being recorded in the ongoing exploration of inland basins by the Corporation is capable of growing Nigeria’s reserve to 40 billion barrels by the year 2023, the GMD who spoke through Group General Manager Frontier Exploration Services, Abdullahi Bomai said.


Mere Kyari said, “In depth geological and geochemical studies so far showed that there is strong hydrocarbon bearing indicators that have been confirmed as oil and gas bearing formations in 8 local government areas which extends to 2 other local governments in Kwara state and 1 Local Local government in Kogi state.
“Further exploration activities based on the need for exploration in the Bida Basin, NNPC management has graciously approved the award of contract to Integrated Data Services Limited (IDSL) and their alliance partners (BGP/CNPC International Nigeria limited to embark on immediate Seismic Data Acquisition to further unravel the presence of hydrocarbons in the Bida Basin”.
The NNPC boss told Governor Sani Bello that while efforts are being made to tap the potentials, “The NNPC is indeed delighted for the opportunity of today’s visit to inform you of the activities of NNPC/FES and also to solicit for your support.”
According to Kyari, significant progress is being made in the ongoing exploration of inland basins, with a realistic and achievable target of growing the nation’s reserve to 40 million by year 2023 and, “today we are glad to inform you of the commencement of hydrocarbon exploration in the sedimentary section of Niger state.”
While soliciting for the support, cooperation and participation of the states and local government councils, traditional rulers and community leaders towards achieving the national mandate, Kyari said the deployment of light and heavy machineries along the basin will soon commence.
The NNPC GMD gave the names of the affected local government areas to include; Mokwa, Lavun, Gbako, Bida, Katcha, Agaie, Edati and Lapai, adding that in the course of conducting the operations, a lot of skilled, semi-skilled and unskilled workers from Niger state will be engaged.
Governor Abubakar Sani Bello in his response expressed happiness over the realization of the project, stressing the need for the Corporation to pay adequate compensation to communities who would be affected by the oil exporation.
Governor told the NNPC delegation, “We are all excited over the good news of the oil exploration. As you know, research in the development of the Bida Basin has been on for some times. We are however happy that the NNPC is seeing to the success of the project. We are hopeful that Niger state will join the oil producing states.”
Bello also assured of preparedness of his administration to work with the NNPC towards ensuring that the affected communities are carried along and as well to compensate the people that would be affected by the oil exploration activities.
GUYS, WHAT DO YOU THINK?
...................
LINKS YOU MIGHT LIKE.
Kindly Visit My Blog For Latest News,
Entertainment, Video Documentaries
www.edesononlinenews.com
.........
I AM ALSO A WEBSITE DESIGNER.
CALL OR WHATSAPP ME TO DESIGN
YOUR WEBSITE 08136125128
...........
You Can Visit My Company Official Website To Learn More About My Products And Services
www.edesoninfotech.com.ng
.........

Thomas Garba and 15 others

More effort should be made toward developing the non oil sector.

NUHU: But Nigeria is rich with oil an it should be utilised

Another waste of money to be made... govt and oil that is we ear in Nigeria everyday.

Why not explore the non oil sector