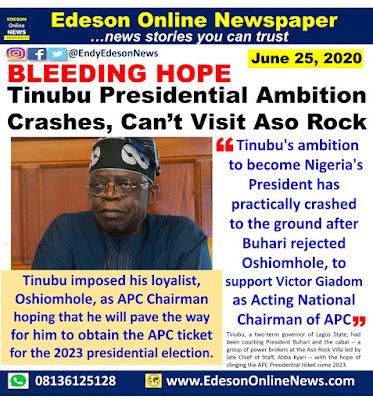 
Tinubu had strategically
imposed his loyalist, Oshiomhole, a former labour movement leader in Nigeria, as APC Chairman hoping that he will pave the way for him to obtain the APC ticket for the 2023 presidential election.

Tinubu had also convinced himself that by surrendering his loyalty to President Buhari and the cabal he would be able to curry the favour of the Northern parts of Nigeria for his presidential ambition.
However, Tinubu's hope of becoming the President was absolutely dashed on Wednesday as Buhari rejected the Tinubu-Oshiomole political structure in the APC.
In a derisive statement issued via Twitter on Wednesday, Senior Special Assistant on Media and Publicity to Buhari, Mallam Garba Shehu, said, “The President has received very convincing advice on the position of the law as far as the situation in the party is concerned and has determined that the law was on the side of Victor Giadom as Acting National Chairman.
“Because he will always act in accordance with the law, the President will be attending the virtual meeting Giadom called for tomorrow afternoon.
“We urge the media to stop promoting manufactured controversies and to not give any further room for mischievous interpretations of the law on this matter.
“In addition to the President, the Giadom meeting will, hopefully, be attended by our governors and leaders of the National Assembly.”
Sources said Tinubu called the President on phone through the President's Personal Secretary, Yusuf 'Tunde' Sabiu, in order to book an appointment to see the President.
A source claimed that a jet was revving at the Lagos airport to convey the "National Leader" to Abuja at the time.
However, Yusuf did not allow the telephone conversation between Buhari and Tinubu to happen, making it impossible for the former Lagos State governor to travel to Abuja to see the President.
The root of the divide within the APC is about the party's choice of candidate for the 2023 presidential election.
Sources revealed that Plateau State governor, Simon Lalung, Governor of Jigawa State, Abubakar Atiku Bagudu, Governor Kayode Fayemi of Ekiti State, Governor Nasir el-Rufai of Kaduna State, Governor Rotimi Akeredolu of Ondo State as well as Senator Ibikunle Amosun and Transportation Minister, Rotimi Amaechi, all belong to a common bloc that has sworn to embarrass and ridicule Tinubu's presidential ambition and bury it permanently.
GUYS, WHAT DO YOU THINK?
...................
LINKS YOU MIGHT LIKE.
Kindly Visit My Blog For Latest News,
Entertainment, Video Documentaries
www.edesononlinenews.com
.........
I AM ALSO A WEBSITE DESIGNER.
CALL OR WHATSAPP ME TO DESIGN
YOUR WEBSITE 08136125128
...........
You Can Visit My Company Official Website To Learn More About My Products And Services
www.edesoninfotech.com.ng
.........

Charles Mathias and 49 others

Nothing new. It was predicted and we knew it would happen. Meanwhile, this is a tip of an iceberg of what to come still.

I no fit cry

The sole purpose of Tinubu in forming alliance with Buhari was for a reciprocal gift of power by Buhari. But Buhari knows that they're both men miles apart in terms of political ideology, perspectives on Nigeria, and lifestyle generally.

Tunubu cant b president, even if he contest

Tinubu and co will definitely retire in kirikiri soonest.

Hello fellow Nigerian. I want to use this great opportunity to say a Big thanks to each an everyone who stand as a candidate of A.P.C Kindly continue to support my party as I empower each and every one with the sum of NGN200,000 to start good business, further school and learn good works. quickly Call Mr Akuku Akao on: 09067659538, and receive a transaction of NGN:200,000 Naira to the following bank. UNITY BANK, FCMB BANK, UNION BANK, ACCESS BANK, AND ZENITH BANK.Thank you and God bless you all.