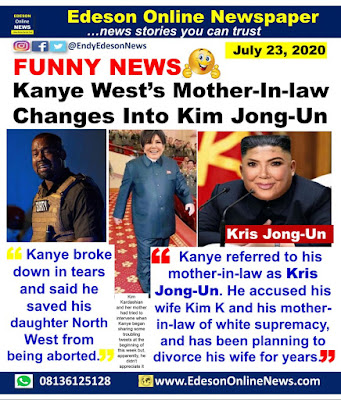 Kanye West referred to his mother-in-law Kris Jenner as Kris Jong-Un and Twitter users are having a field day making memes by photoshopping Kris Jenner and Kim Jong-Un into one person.
It began with Kanye going on Twitter to call out his wife Kim Kardashian and her mother. He accused them of being white supremacists then called his mother-in-law "Kris Jong-Un" (read here), thereby likening her to the North Korea dictator, Kim Jong-Un.
Twitter users found that part hilarious and they have started creating memes by photoshopping Kris's head to Kim Jong-Un's body.
Kanye West is tweeting again and this time, he's saying some shocking things about his family, Michael Jackson, and other people.


He said he's been trying to divorce Kim Kardashian for years now. He said he began considering the divorce after Kim met Meek Mill at a hotel for prison reform
- which was over two years ago. He further stated that he has no problem with Meek Mill but that Kim was "out of line".

He further accused the Kardashians of "white supremacy" and said Kim and her mother brought two doctors to "51/50" him.
51/50 is a provision in the Welfare and Institutions Code that allows a person with a mental illness to be involuntarily detained in a psychiatric hospital for up to 72 hours.
Kim Kardashian and her mother had tried to intervene when Kanye began sharing some troubling tweets at the beginning of this week (read here) but, apparently, he didn't appreciate it, hence the tweet.


In the recent tweets, Kanye went on to say that he knows they may not let him see his children till they turn 18.
He also took a dig at Kris by asking her to get back to him when she's done organizing her children's "Playboy" shoot.
He shared screenshots of his message with Kris Jenner. In the message, he asked if she's ready to talk to him or "go to war".
In his tweets, he also said that Lil Baby is his favorite rapper but has refused to do a song with him. He also called himself the future president.


He further alleged that Michael Jackson was murdered.
He wrote: "MJ told you about Tommy before they killed him. Kim saved my daughters life in the name of Jesus It’s Gods choice only I will live for my children. Kris I’m in Cody if your not planning another one of your children’s playboy shoots."
Kanye's troubling tweets began after his first presidential rally which held over the weekend. During the rally, he broke down in tears and said he saved his daughter North West from being aborted.
GUYS, WHAT DO YOU THINK?
...................
LINKS YOU MIGHT LIKE.
Kindly Visit My Blog For Latest News,
Entertainment, Video Documentaries
www.edesononlinenews.com
.........
I AM ALSO A WEBSITE DESIGNER.
CALL OR WHATSAPP ME TO DESIGN
YOUR WEBSITE 08136125128
...........
You Can Visit My Company Official Website To Learn More About My Products And Services
www.edesoninfotech.com.ng
.........

Martins J Temitope and 40 others

Kanye only acts weird, not mad

He needs some medical attention

Kanye his sick....have always knew but its getting worse now

This is due to much stress I guess. He is acting abnormal but there might be truth in what he is saying

I think he has bipolar,this can't be normal, He needs help now