Magu Thrown Into A Cell Like A Thief, Detained By Police In Abuja 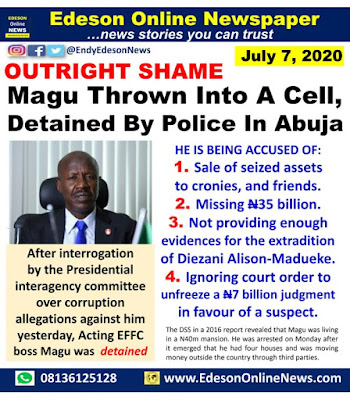 Magu detained after Ayo Salami led committee finished interrogating him yesterday at 10pm. Some of the allegations against him:
1. Discrepancies in recovered funds.
2. Leaking reports to the media before going to Court.
3. Sale of seized assets to cronies, associates and friends.
4. Missing N35 billion.
5. Not providing enough evidences for the extradition of Diezani Alison-Madueke.
6. Ignoring court order to unfreeze a N7 billion judgment in favour of a suspect.


The ordeal of Acting Chairman of the Economic and Financial Crimes Commission, Ibrahim Magu, got worse on Monday evening when he was thrown into a cell at the Force Criminal Investigation Department Headquarters in Area 10, Federal Capital Territory, shortly after being interrogated by an interagency panel inside Aso Rock Villa, Nigeria's seat of power.
The combined security team stormed the EFCC office at Wuse II in three trucks to arrest and move Magu to the Presidential Villa in the Asokoro area of the Federal Capital Territory to face the panel.


The interagency committee led by a former Court of Appeal judge, Ayo Salami, did not show Magu a copy of the allegations against him even though he requested to see a one.
Panel members, it was gathered, only read from a dossier in front of them during the grilling session.


After completion of interrogation by the Presidential interagency committee over corruption allegations against him, Salami, who was said not to be satisfied at Magu's defence, ordered that the Acting EFCC boss be kept in detention until 10:00am this (Tuesday) morning when he'll be returned to Aso Rock Villa for continuation of the grilling by the committee.
These developments squashes claims by the EFCC spokesperson, Dele Oyewale, that Magu was not arrested but voluntarily submitted himself to the panel.
It also punctures the lie by DSS spokesperson, Peter Afunanya, that the secret police was not involved in the arrest of Magu. The DSS in a 2016 report revealed that Magu was living in a N40m mansion.


He was arrested on Monday after it emerged that he had four houses and was moving money outside the country through third parties.
GUYS, WHAT DO YOU THINK?
...................
LINKS YOU MIGHT LIKE.
Kindly Visit My Blog For Latest News,
Entertainment, Video Documentaries
www.edesononlinenews.com
.........
I AM ALSO A WEBSITE DESIGNER.
CALL OR WHATSAPP ME TO DESIGN
YOUR WEBSITE 08136125128
...........
You Can Visit My Company Official Website To Learn More About My Products And Services
www.edesoninfotech.com.ng
.........

But the DSS denied it

Endy Edeson but you said on someone post that its not true na why post it yourself?

From Ribadu to Magu none of them is clean. The efcc is too powerful. It can not be an investigation, prosecution and at the same time forfeitures retaining agency perpetually and not abuse their powers.

You reported yesterday that the news wasn't true... they are using all these tactics to deceive Nigerians

When the hunter is being hunted, irony of life.. Even those who are suppose to be fighting the so called corruption are more corrupt.

He is not above the law.
Someone in the status of an EFCC head was invited by the Presidency, he did not run away neither did he refuse to be summoned and was not declared wanted. The DSS can not arrest him. There is order of arrest amongst the military and the paramilitary organisations. Even a recruit can't just be arrested like that unless at the point of criminal activity.
You report first to the DPO, Area Commander, Commissioner, Zonal Command AIG, IG Before arrest depending on the rank. Same goes to the military if the police wants to arrest an officer that committed a crime . unless such officer was arrested at the point of committing the crime, then, u don't need to inform any one.
I hate educating biased minds.

It makes no meaning. It makes no difference.
Even if Magu falls a victim today, his achievements is what position this administration as being anti-corruption fighter.
No other arm or agency of government has achieved the feat of the Magu lead EFCC from creation till now.
It was only the Ribadu lead time that can come nearer.
And even then Ribadu was hunted and disgraced by Ibori and Aondoka during Yaradua regime.
Every anti corruption czar stand the risk of being hunted and dropped.
So celebrating the arrest of Magu is uncall for as it amount to celebrating the victory of the plunderers of our Treasury.
Apart from the courage and zeal exhibited by Magu even in the face of threats and risk to life, which other agency of government dares the mafias in our system? Is it ICPC? SFU? The police? DSS? None.

Hushpuppi, the one is Hushuncle

Why did EFCC deny his arrest yesterday?
This country sha...
Posted by Endy Edeson