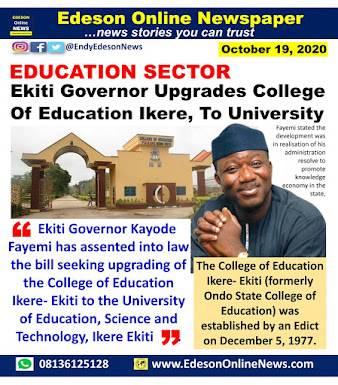 Ekiti Governor Kayode Fayemi has assented into law the bill seeking upgrading of the College of Education Ikere- Ekiti to the University of Education, Science and Technology, Ikere Ekiti.

The Governor signed the bill into law at the exquisite Executive Council Chamber, Government House, Ado-Ekiti, as part of activities making the second anniversary of his administration.

Fayemi, who stated the development was in realisation of his administration resolve to promote knowledge economy in the state, assured his government would continue to give utmost priority to the promotion of knowledge in the State.

Commending the Speaker and Assembly members for passing the bill that enhance the fulfilment of his administration’s drive to improve the lives of the people, Fayemi noted the stress of passing bill to law could be tedious and demanding.

According to him, the bill, which was passed independently by Members of the House of Assembly as part of their constitutional responsibilities was done in the best interest of the people of the State.

Mediator Isaac Akintoye why is it useless?

Hon Don White Mfr how is he a foolish governor ?

All these change of names, college of education to university, yet, there won't be any difference in the system
Bldr Bamigboye Olu... replied · 1 reply

We hope it will change the lives of the people

Endy Edeson it's utterly useless if the aim of the government is only to make money and not improve on anything. I graduated from that college and I tell you it is like primary school
Posted by Endy Edeson