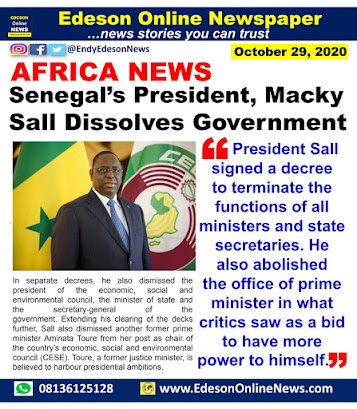 Senegalese President Macky Sall has dissolved his 32-strong government team with immediate effect. Sall signed a decree to terminate the functions of all ministers and state secretaries, the presidency said in a statement late on Wednesday.

Presidential spokesman, Abdou Latif Coulibaly said Sall had signed a decree to that effect but gave neither a reason for the move nor a date for the formation of a new cabinet.

In separate decrees, he also dismissed the president of the economic, social and environmental council, the minister of state and the secretary-general of the government.

Extending his clearing of the decks further, Sall also dismissed another former prime minister Aminata Toure from her post as chair of the country’s economic, social and environmental council (CESE).

Thereafter, Sall abolished the office of prime minister in what critics saw as a bid to wield more power himself.

In a separate decree Wednesday, Sall abolished the functions of the secretary-general to the presidency Mahammed Boun Abdallah Dione, previously his prime minister and a longtime close associate.

Extending his clearing of the decks still further, Sall also dismissed another former prime minister Aminata Toure from her post as chair of the country’s economic, social and environmental council (CESE).

Toure, a former justice minister, women’s rights and anti-corruption campaigner, is believed by some observers to harbour presidential ambitions.

Engr GodWin Emeka and 13 others

Buhari should dissolve himself

No. They should not worry. The youth will dissolve the entire government in the next General elections

If the president can get rid of the national assembly..... and ministers.... replace them with youth and low pay. The country would be moving in the right direction .