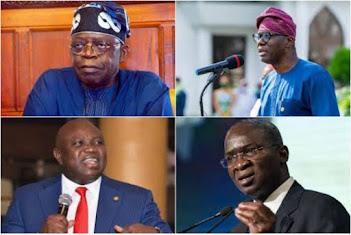 The All Progressives Congress (APC), Lagos state chapter on Tuesday said it is in total support with the decision by Governor Babajide Sanwo-Olu's plans to repeal the Public Office Holder (Payment of Pension Law 2007), which provides for payment of pension and other entitlements to former governors and their deputies.

The governor made the announcement while presenting the 2021 budget to the Lagos State House of Assembly.

“Mr. Speaker and Honourable Members of the House, in light of keeping the costs of governance low and to signal selflessness in public service, we will be sending a draft executive bill to the House imminently for the repeal of the Public Office Holder (Payment of Pension Law 2007), which provides for payment of pension and other entitlements to former Governors and their Deputies,” Sanwo-Olu said.

Speaking in a chat with Daily Independent, Alhaji Tunde Balogun, the state chairman of the party every right thinking Nigerian should support and applaud the decision by the governor, given the dwindling resources in the country.

He said Lagos state will channel the money into developing the state and providing infrastructure and other amenities for the teeming population of citizens in the state.

He said "We are in total support of it. It is a good move and it must have been well thought out before the decision was made. It is a welcome idea as far as the party is concerned".

"In many states, we have seen many people complaining about such pensions to past governors and deputies".

"If we consider the dwindling revenue all over the country and the economy that is declining in terms of oil prices and what is derived as revenue from oil, it affects all the economy of all the states in the country.

Olayemi Oladele Jimoh and 49 others

All these were done in preparation for Tinubu 2023 .

We need referendum in Nigeria

Sanwo-olu consulted the former Governors before embark on decision.

Sanwolu is just trying to use these to cover his hand in the killings of lekki, and make it look he is cutting off waste from governances. We will never forget Lekki killings, don't bother to contest come next election, we won't vote for you. We won't vote for a man who will order soldiers to shoot at peaceful protest and at our children and family. Mr governor you are wicked and inhuman, how can you order soldiers to shoot and kill someone children, and you too have children, don't worry, as you have done to others so shall it be done onto you IJN.

I laughed in Swahili.

He can only say this if he has channelled the monies through other means.

Endy, there is nothing wrong in paying pension to former presidents and their deputies, same to former governors and deputies too. The issue here is the payment of OUTRAGEOUS amounts in the face of the poverty all around. Secondly, why will someone be earning pension at the same time earning salaries at the federal level again as the case is for Fashola.
Finally, if you think Sanwo Olu could have initiated something like this on his own, talkless of going public with it, then you don't know NOTHING, everything is at behest of the godfather.
Fela Biodun Idowu replied · 2 replies

To make it look as if him ( Sowolu is in charge), against the fact that we all know sowolu is a slave boy to the the godfather (Tinubu).

This guy wan step on toes
Posted by Endy Edeson