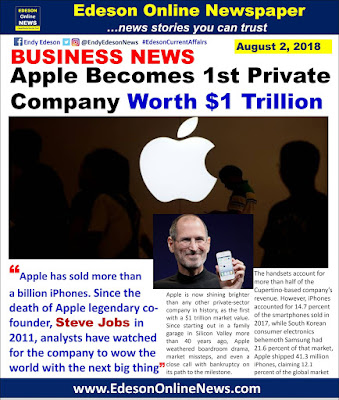 Apple is now shining brighter than any other private-sector company in history, as the first with a $1 trillion market value. Since starting out in a family garage in Silicon Valley more than 40 years ago, Apple weathered boardroom drama, market missteps, and even a close call with bankruptcy on its path to the milestone. The handsets account for more than half of the Cupertino-based company’s revenue.
However, iPhones accounted for 14.7 percent of the smartphones sold in 2017, while South Korean consumer electronics behemoth Samsung had 21.6 percent of that market. Apple shipped 41.3 million iPhones, claiming 12.1 percent of the global market. Apple has sold more than a billion iPhones. Since the death of Apple legendary
co-founder, Steve Jobs in 2011, analysts have watched for the company to wow the world with the next big thing. The tech company's stock jumped 2.8 percent to as high as $207.05 around midday today, bringing its gain to about 9 percent since Tuesday when it reported June-quarter
results above expectations and said it bought back $20 billion of its own shares, Daily Mail reports.

Why Frank? is it because it is too expensive?

Is not that it expensive.. It because of our poor economy.

David, you are right. But iPhone is a luxury brand. Obanla, yeah, they can be next in line @Blings: It's quite sad Jobs died when his company is booming

Endy Edeson..forget about luxury brand...it is easy to buy an iPhone in developed countries for $1,000...pay $200 at point of sales then after pay the remaining $800 installmentally
Edited ·

Tim Cook is awesome abeg... Is dng me like I should buy shares wt dem

@Goodie: Buy "naa". That would be nice. You are sure of your investment. @David: Not everybody have the patience to pay in installment

I admire the company but I prefer android. But if u need security, go for iPhone
Posted by Endy Edeson