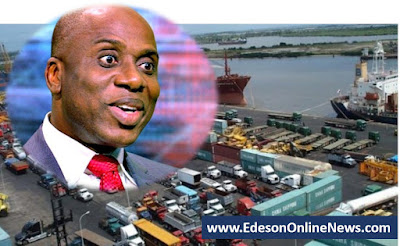 The federal government is set to build a new Sea Port, estimated to cost $800 million in Pessu area of Warri in Delta state. Minister of Transportation, Rt Hon Rotimi Amaechi disclosed this Thursday, at the Petroleum Training Institute Conference Centre, in Uvwie council area of Delta state.
Amaechi who was in company of the Minister of State for Labour and Employment, Mr Festus Keyamo (SAN) and Director-General, National Directorate of Employment, Dr. Nasiru Ladan Argungu tasked youths of the area to support the forthcoming project.


The trio were in the state to present starter packs, micro enterprise enhancement loans and resettlement packages to 1,700 women and youths under the National Directorate of Employment empowerment programme.
While urging youths to ensure the project goes on smoothly when it takes off Amaechi revealed further that a similar Sea Port will be built in Bonny, Bonny local government area of Rivers state
“We are building a brand new Sea Port in Pessu. It will cost 800 million dollars. When you stop them from working you are losing such a huge investment where the entire community can be contractors, some can supply sand.
“There is also the Bonny sea Port that is coming. The best thing to do is allow the development. Imagine the companies that have left Warri, let the Sea Port project go on smoothly,” the minister appealed.
On his part, the Minister of State for Labour and Employment, Mr. Keyamo reassured of the federal government’s commitment to lift millions of Nigerians out of poverty.
He added that with what is being given in this early stage of President Muhammadu Buhari’s administration, Deltans should expect more, in terms of empowerment, to come in the next few years.
Some items given to the beneficiaries drawn from the 25 LGAs in the state include sewing machines, knitting machines, welding machines and cash sums.
GUYS, WHAT DO YOU THINK?
....................................
LINKS YOU MIGHT LIKE
For more News visit my blog
www.edesononlinenews.com
Or Know About My Services by
Visiting my Company Website
www.edesoninfotech.com.ng
I am also a Website Designer.
Call me to design your website: 08136125128
....

Ambrose Ayodele and 12 others

They think we are blind? They will but the question is when?

Why Pesu? The present sea port in Warri is not functioning to capacity it ought to. Reasons because the water way is not deep enough for sea and ocean going heavy vessels to berth. Obviously building the said new seaport in Pesu area will end up a stalemate if not a mirage. The present seaport in Warri is seriously yawning for dredging. I don't see any good reason behind this Pesu seaport project. Pesu is not far from the present Warru seaport. Why all this drama by the federal government?

I reserve my comments.

This project will end up entangling the Urhobo, Ijaw and the Tsekiri communities in fracas which will eventually bear the fruits being sowed. Even if the said 'seaport' as targeted becomes a reality, it will end up a wasted effort which would brew skirmishes and in the end be a mushroom project.

Mirage
Another news in another beer parlour

Thought elections is over..
Posted by Endy Edeson