45-Year-Old Actress Rita Dominic Finally Reveals Why She Is Not Married. 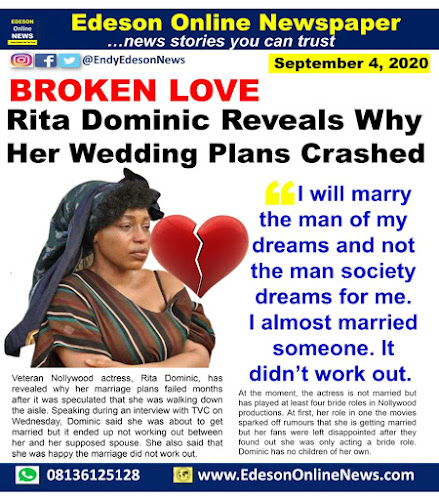 Speaking during an interview with TVC on Wednesday, Dominic said she was about to get married but it ended up not working out between her and her supposed spouse.

She also said that she was happy the marriage did not work out.

According to her, rather than bowing to societal pressure, she will marry the “man of her dreams” but in her own time.

“I will marry the man of my dreams and not the man society dreams for me. I almost married someone.

“We were there. We were at that point.

At the moment, the actress is not married but has played at least four bride roles in Nollywood productions. At first, her role in one the movies sparked off rumours that she is getting married but her fans were left disappointed after they found out she was only acting a bride role. Dominic has no children of her own.

Moyinoluwa Ilesanmi and 34 others

See this fine woman.
No husband.
This life no balance at all.

Rita my crush. You will surely get married at God's own time.
You replied · 1 reply

Rita come marry me and stop all this media hype,and let the world be at peace with itself.