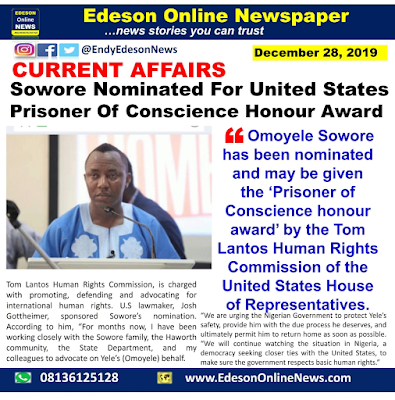 Omoyele Sowore has been nominated and may be given the ‘Prisoner of Conscience honour award’ by the Tom Lantos Human Rights Commission of the United States House of Representatives.
Tom Lantos Human Rights Commission, is charged with promoting, defending and advocating for international human rights.
U.S lawmaker, Josh Gottheimer, sponsored Sowore’s nomination. According to him, “For months now, I have been working closely with the Sowore family, the Haworth community, the State Department, and my colleagues to advocate on Yele’s (Omoyele) behalf.
“We are urging the Nigerian Government to protect Yele’s safety, provide him with the due process he deserves, and ultimately permit
him to return home as soon as possible.

“We will continue watching the situation in Nigeria, a democracy seeking closer ties with the United States, to make sure the government respects basic human rights.”

Uyi Placebo Ehi Airen and 32 others

It as gotten to the stage that united state will now be using commands for Buhari and he dare not disobey. Buhari has finally turn Sowore to a real presidential candidate.

Buhari and his cronies has successfully made this man popular...

Does that change his bail conditions? Does it change the fact that, he cannot go outside of Abuja? Does it gives him back his international passport?🤗🤔😂👈

The Yeles on the win again