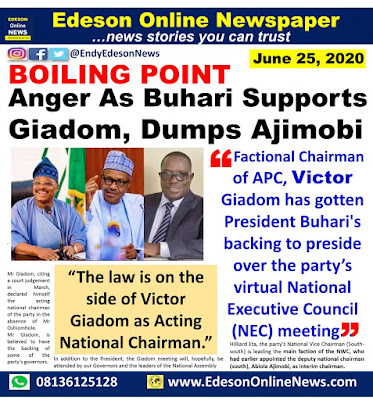 President Muhammadu Buhari has declared support for the controversial deputy national secretary of the All Progressives Congress (APC), Victor Giadom, who has called a virtual National Executive Council (NEC) meeting of the party for Thursday.
Speaking through his spokesperson, Garba Shehu, on Wednesday afternoon, the president said he would attend the meeting because “the law is on the side of Victor Giadom as Acting National Chairman.”
“The President has received very convincing advice on the position of the law as far as the situation in the party is concerned and has determined that the law is on the side of Victor Giadom as Acting National Chairman.
“We urge the media to stop promoting manufactured controversies and to not give any further room for
mischievous interpretations of the law on this matter.
“In addition to the President, the Giadom meeting will, hopefully, be attended by our Governors and the leaders of the National Assembly,” Mr Shehu wrote on his Twitter account.
Mr Giadom, who is believed to have the backing of some of the party’s governors and the Minister of Transport, Rotimi Amaechi, has been in a tussle with a faction of the party’s National Working Committee (NWC) for the control of the party since the appeal ourt upheld the suspension of Adams Oshiomhole as the national chairman, last week Tuesday.
Mr Giadom, citing a court judgement in March, declared himself the acting national chairman of the party in the absence of Mr Oshiomhole.
Hilliard Eta, the party’s National Vice Chairman (South-south) is leading the main faction of the NWC, who had earlier appointed the deputy national chairman (south), Abiola Ajimobi, as interim chairman.
Mr Giadom was surreptitiously replaced on Monday by Worgu Boms, 24 hours after the Rivers State chapter of the party declared him suspended over “gross infractions of the party’s constitution.”
Mr Giadom’s suspension was backed by the Rivers State High Court’s judgement on Tuesday, some minutes after he scheduled a virtual NEC meeting to be attended by Mr Buhari for Thursday.
In reaction to the speculated NEC meeting, the party’s acting national secretary, Waziri Bulama, backed by 16 other members of the NWC said Mr Giadom lacks the constitutional right to call such a meeting.
“We are constrained to once again react to a purported invitation to a National Executive Committee meeting of our great party; the All Progressives Congress (“APC”) issued by one Victor Giadom who until the last general elections in 2019 held the position the Deputy National Secretary of the Party.
“Our esteem members are advised to disregard this invitation because the author and sole signatory of the said invitation is not member of the National Working Committee (“NWC”) of our party, talk more of being an Acting National Chairman as claimed,” Mr Bulama said in a statement issued earlier on Wednesday.
However, Mr Buhari has declared his support for Mr Giadom and promised to attend Thursday’s meeting of the NEC of the party.
GUYS, WHAT DO YOU THINK?

Stan Mbata and 16 others

AS FAR AS NIGERIA IS CONCERN EVERY IMPOSSIBILITY IS POSSIBLE IN APC, WATCH OUT FOR PART2 of this drama, very interesting can't wait .

Ahmed; who do you think will emerge authentic governor after all these crisis ?

Is ajimobi fit to be chairman this time, he is sick for now

John: His sickness dont stop him from his political rights.

Fair hearing is bedrock of democracy