Jim Nwobodo Said Igbo Man Must Be President Of Nigeria In 2023. 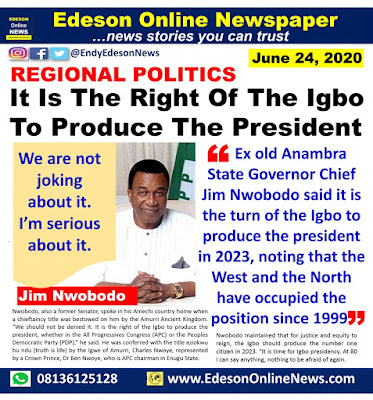 THE Southeast should not be denied the chance to produce the president in 2023, a former old Anambra State Governor Chief Jim Nwobodo said on Monday.
He said it was the turn of the Igbo to produce the president, the West and the North having had shots at the top job since 1999.
Nwobodo, also a former Senator, spoke in his Amechi country home when a chieftaincy title was bestowed on him by the Amurri Ancient Kingdom.
“We should not be denied it. It is the right of the Igbo to produce the president, whether in the All Progressives Congress (APC) or the Peoples Democratic Party (PDP),” he said.
He was conferred with the title eziokwu bu ndu (truth is life) by the Igwe of Amurri, Charles Nwoye, represented by a Crown Prince, Dr Ben Nwoye,
who is APC chairman in Enugu State.

Nwobodo maintained that for justice and equity to reign, the Igbo should produce the number one citizen in 2023.
“It is time for Igbo presidency. At 80 I can say anything, nothing to be afraid of again.
“We are not joking about it. I’m serious about it. 2023 is the turn of Southeast to produce the president of Nigeria,” he said.
The elder statesman stressed that “the country is sitting on a tripod and Igbo are one of the tripods and can’t be relegated to the background.”
Nwobodo added: “We are all one irrespective of political affiliation. Whether APC or PDP, I see everyone as a brother.”
On why he left the APC, he said: “It is inconsistent. I can’t understand what was going on there.
“We were three who started PDP in Nigeria. Myself, the late Dr Alex Ekwueme and the late Dr Chuba Okadigbo. I am the only one alive among the three of us.
“I am back to PDP because it’s my natural habitat. I can understand every movement in the PDP.”
He said the chieftaincy title meant so much to him.
“I value the title more than any other because I’m known to always say the truth no matter the situation,” Nwobodo said.
Nwoye said Nwobodo deserved the title for standing for the truth and his legacies, especially in education.
GUYS, WHAT DO YOU THINK?
...................
LINKS YOU MIGHT LIKE.
Kindly Visit My Blog For Latest News,
Entertainment, Video Documentaries
www.edesononlinenews.com
.........
I AM ALSO A WEBSITE DESIGNER.
CALL OR WHATSAPP ME TO DESIGN
YOUR WEBSITE 08136125128
...........
You Can Visit My Company Official Website To Learn More About My Products And Services
www.edesoninfotech.com.ng
.........

Thomas Garba and 16 others

How is this even possible?
Just asking for my neighbor

No is the right of cross river to produce president

U will force 2 vote PDPIGS only southern East party abi, Just said Southerner will b next president 2023.

No one gives power on right... you go for it.

Everyone just want cheap popularity sha. There is God oo

President of which country?

I still support this!....but what of Biafra sir?