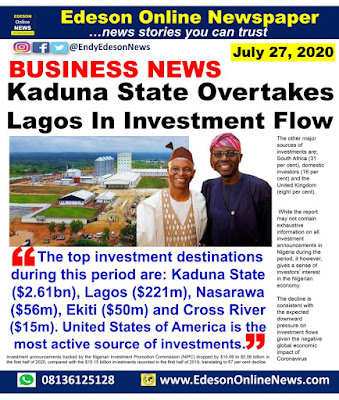 Investment announcements tracked by the Nigerian Investment Promotion Commission (NIPC) dropped by $10.09 to $5.06 billion in the first half of 2020, compared with the $15.15 billion investments recorded in the first half of 2019, translating to 67 per cent decline.
In the report released at the weekend, NIPC stated that, “The decline is consistent with the expected downward pressure on investment flows given the negative global economic impact of COVID-19.”
In the report, NIPC which tracked 34 projects across 16 states, FCT and the Niger Delta from January to June, 2020, listed the top investment destinations during the period as Kaduna State ($2.61bn), Lagos ($221m), Nasarawa ($56m), Ekiti ($50m) and Cross River ($15m).
The United States of America was the most active source of investments during the period, with 43 per cent of the announcements.


The other major sources were South Africa (31 per cent), domestic investors (16 per cent) and the United Kingdom (eight per cent). While the report may not contain exhaustive information on all investment announcements in Nigeria during the period, it however, gives a sense of investors’ interest in the Nigerian economy.
“NIPC did not independently verify the authenticity of the investment announcements but is working on tracking the announcements to facilitate their progress to actual investments,” the commission revealed.
Meanwhile, NIPC announced that negotiations with the leadership of the NIPC staff union on their industrial action had been concluded.
A statement released by the commission’s Director, Strategic Communication Department, Mr. Emeka Offor, indicated that after extensive discussions with union officials over several days, two agreements were signed by all parties on Friday to end the week-long industrial action.
GUYS, WHAT DO YOU THINK?
...................
LINKS YOU MIGHT LIKE.
Kindly Visit My Blog For Latest News,
Entertainment, Video Documentaries
www.edesononlinenews.com
.........
I AM ALSO A WEBSITE DESIGNER.
CALL OR WHATSAPP ME TO DESIGN
YOUR WEBSITE 08136125128
...........
You Can Visit My Company Official Website To Learn More About My Products And Services
www.edesoninfotech.com.ng
......

Impossibility and can never be possible.

We're de get the money were insecurities in kaduna here

Endy Edeson...There must be something or a sector that became attractive to foreign investors in Kaduna in the period under review, but please be informed that Investment is totally different from making money, both to the investors and in this case Kaduna, as the business domain.
Edited ·

Story. All Kaduna has got is war and destruction

Investment going to a war zone? Oga, this is far from the truth.

Did they make more money through ethnic cleansing,destruction nd displacements?

Very funny
Maybe because of the closed of seaport that affected Lagos State. But honestly Kaduna State Government is working when it comes to investment and beautiful road with the help of Rail transportation.

Why all these negative Comments?
C'mon, whenever a simple post is made in Nigeria, we quickly run to hang tribal tag on it.

Kaduna has attracted more investors than Lagos state, deal with it.

Nobody is asking for your approval for it to be true, their governor has worked for it, hard work pays.

Lagos dey for behind, KD has taken the lead😋
Edited ·

They should invest in security
Posted by Endy Edeson