Nigerian Doctors Funmilayo And Bola Had Sex Twice While Drunk 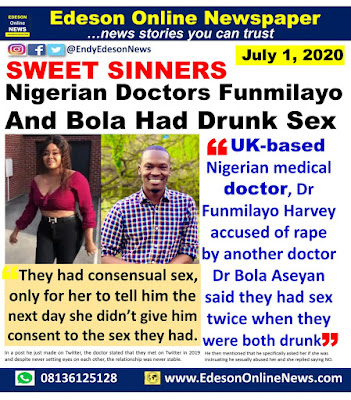 UK-based Nigerian medical doctor, Dr Funmilayo Harvey was accused of rape by another doctor Dr Bola Aseyan, has responded to the allegation.
In a post he just made on Twitter, the doctor stated that they met on Twitter in 2019 and despite never setting eyes on each other, the relationship was never stable.
Dr Funmilayo responds to rape allegation – We had sex twice
He further revealed that Bola, who is a practicing doctor in Nigeria, and not the UK, insisted on coming to the UK to visit, for reasons best known to her, as her Visa was initially not granted.


According to him, they had consensual sex, twice. The 1st being after they were both drunk, only for her to tell him the next day she didn’t give him consent to the sex they had.
He then mentioned that he specifically asked her if she was insinuating
he sexually abused her and she replied saying NO.

In his rebuttal, Harvey wrote on how he accommodated Bola for 4 months in his apartment despite the duo not being in talking terms, and his only crime was him not allowing her into his heart.
GUYS, WHAT DO YOU THINK?
...................
LINKS YOU MIGHT LIKE.
Kindly Visit My Blog For Latest News,
Entertainment, Video Documentaries
www.edesononlinenews.com
.........
I AM ALSO A WEBSITE DESIGNER.
CALL OR WHATSAPP ME TO DESIGN
YOUR WEBSITE 08136125128
...........
You Can Visit My Company Official Website To Learn More About My Products And Services
www.edesoninfotech.com.ng
.........

Martins J Temitope and 10 others

I Fear Naija ladies, everything is now rape. May God help us

It now time for us written agreement before sex

When one is drunk, its more or less a stimulant that can make one go as many as possible sexually, claiming he raped her is an illusion

The lady got this man drunk and rape him, the way ladies drink beers this days only God knows

She sounds like an opportunist to me. Having said that, you dare not have sex with a lady when she is drunk. Do it when she is sober! The so called male doctor ought to have known that because he lives and work in the UK. He risks loosing his licence if this is pushed further by this lady. This is a serious matter guys for those of you saying its rubbish, it is not.
Posted by Endy Edeson