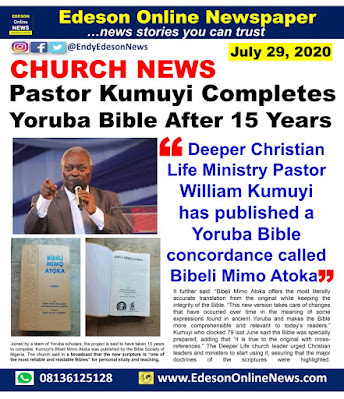 Joined by a team of Yoruba scholars, the project is said to have taken 15 years to complete.

Kumuyi’s Bibeli Mimo Atoka was published by the Bible Society of Nigeria.

The church said in a broadcast that the new scripture is “one of the most reliable and readable Bibles” for personal study and teaching.

It further said: “Bibeli Mimo Atoka offers the most literally accurate translation from the original while keeping the integrity of the Bible.

“This new version takes care of changes that have occurred over time in the meaning of some expressions found in ancient Yoruba and makes the Bible more comprehensible and relevant to today’s readers.”

Kumuyi who clocked 79 last June said the Bible was specially prepared, adding that “it is true to the original with cross-references.”

The Deeper Life church leader urged Christian leaders and ministers to start using it, assuring that the major doctrines of the scriptures were highlighted.

Notably, the first African Anglican bishop in Nigeria Samuel Ajayi Crowther is credited to have made the first translation of the Bible to Yoruba.

In the 1880s, Crowther had begun to work in languages other than Yoruba, but he continued to supervise the translation of the Yoruba Bible (Bibeli Mimọ), which was completed in the mid-1880s, a few years before his death.

He also translated the Anglican Book of Common Prayer into Yoruba.

Crowther died on December 31, 1891 and was buried at Ajele Cemetery in Lagos.

The Minister of Information and Culture, Alhaji Lai Mohammed said the National Art Theatre in Lagos will be revamped with creative hubs of four clusters – film, music, fashion and IT- in 22 months.

A RIGHTEOUS MAN CORRECTING SOME ERRORS IN HIS OWN DIALECT OF THE BIBLE, SOME PEOPLE ARE HERE COMMENTING TRASH, WHAT IS BAD ABOUT THAT?
Edited ·

yoruba version of bible has been in existence since(or he just completed the reading of...)?

I wonder how some people pass their exams and interviews, when you can't even read to understand. O gaa oo

Revised version of Yoruba Bible rather.,

That's how Bible where been written ....it's human.they can fix what they like in it.so don't believe everything.just like bwe all have to know that human changed he's name from Yeshuah to Jesus and also they never wanna includthe true name of God which is Yahuah we Elohim

Does it mean that there were no Yoruba Bible before now?
Posted by Endy Edeson