Shock In PDP As Dogara Joins APC, To Become Vice President In 2023 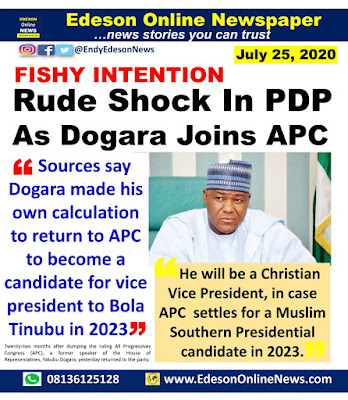 
Sources said the permutations uppermost on the minds of the current leadership of the party, while pushing for Dogara to return to the APC, included the option of the former speaker being used as Christian running mate, in case the party settles for a Muslim Southern Presidential candidate in 2023.
The source said Dogara is also seen as a candidate that could be sold for the Presidency of Nigeria in the South, being a Christian, in case “the powers that be” decides not to cede power to the South.
It was gathered that Dogara was excited by these permutations and subsequently dumped the Peoples Democratic Party (PDP) yesterday, for the APC, the party he dumped in 2018 ahead of the 2019 general election.
Following the defection, Dogara met with President Muhammadu Buhari yesterday in the State House, Abuja.


In a swift reaction, the Peoples Democratic Party (PDP) said it remained a united party, “waxing stronger daily” and described Dogara’s defection as a personal one, while wishing Dogara the best in his new party.
GUYS, WHAT DO YOU THINK?
...................
LINKS YOU MIGHT LIKE.
Kindly Visit My Blog For Latest News,
Entertainment, Video Documentaries
www.edesononlinenews.com
.........
I AM ALSO A WEBSITE DESIGNER.
CALL OR WHATSAPP ME TO DESIGN
YOUR WEBSITE 08136125128
...........
You Can Visit My Company Official Website To Learn More About My Products And Services
www.edesoninfotech.com.ng

Nigeria politics is a mess.

Nigeria politician's like to move from left right and center. It's never a new thing

Hahaha what a joke

There is no shock as far as it is Nigerian Politicians

Before then there will be Biafra