Third Mainland Bridge Will Be Shut Down On Friday 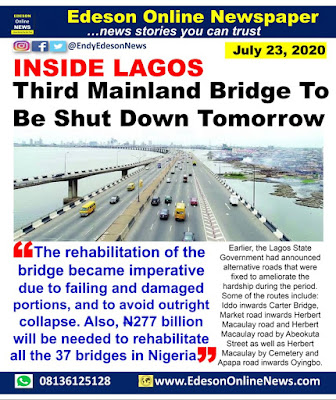 The federal government will from midnight on Friday enforce a partial closure of the Third Mainland Bridge in Lagos State, for scheduled rehabilitation work to ensure that the major transportation facility does not collapse.
It was learnt that the replacement of damaged bars, hydro-demolition of all non-firm parts and lifting of two of the bridge spans will take a large portion of the work, which is expected to last from July to January 2021.
Though works on the bridge, considered the busiest in the country with a total traffic of 132,702 vehicles per day, is expected to impact movement around the city, the federal government has noted that road traffic managers will be deployed to minimise chaos.
Minister of Works and Housing , Mr Babatunde Fashola, while briefing journalists in Abuja on the proposed maintenance of the bridge, said rehabilitation work would be carried out on a length of 3.5 kilometres out of the 11.8 kilometre bridge.


According to him, the rehabilitation of the bridge became imperative due to failing and damaged portions, adding that the government cannot afford to rebuild the bridge if allowed to collapse.
The minister added that N277 billion will be needed to rehabilitate all the 37 bridges nationwide.
Earlier, the Lagos State Government had announced alternative roads that were fixed to ameliorate the hardship during the period.


Some of the routes include: Iddo inwards Carter Bridge, Market road inwards Herbert Macaulay road and Herbert Macaulay road by Abeokuta Street as well as Herbert Macaulay by Cemetery and Apapa road inwards Oyingbo.
The first phase of the rehabilitation, it said, would focus on Oworonshoki inwards Lagos Island in the morning with traffic diversion from midnight to 1p.m. and then Lagos Island inwards Oworonshoki where traffic would be diverted in the afternoon from 1p.m. to midnight.
It urged motorists who do not have urgent assignments on the island during the rehabilitation to avoid the area to discourage the influx of vehicular movements that may lead to more chaos on the roads.

The way these guys call billions is like kobo to them

Later they will be fainting with there eyes wide open like frog..
Posted by Endy Edeson