The Simpsons Predicted Lebanon Explosion In One Of Its Episodes. 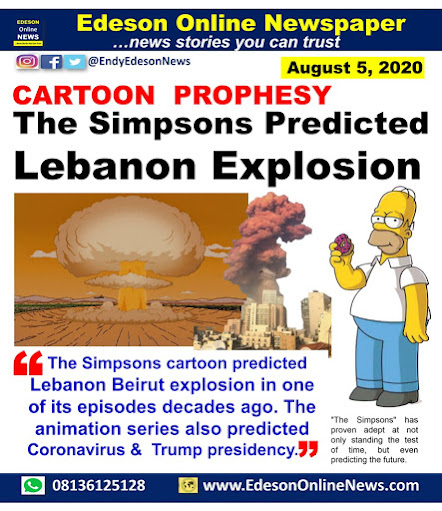 Simpsons cartoon once again predicted Lebanon Beirut blast already For decades. The two explosions that ripped through Beirut, Lebanon’s capital, on Tuesday evening killed more than 100 people and wounded thousands of others. The second, much larger blast devastated a wide area, knocking people down, overturning cars and enveloping much of the central city in dust and smoke. Windows miles away were blown out, leaving streets looking like they had been “cobbled in glass,” according to a resident. The Simpsons" has proven adept at not only standing the test of time, but even predicting the future.

ALSO, in season 11, "The Simpsons" predicted a Donald Trump presidency in the 2000 episode "Bart to the Future." The year (on the show) was 2030, and the Simpson administration had

inherited "quite a budget crunch" from President Trump.

It wasn't the first time the show predicted the future. It foresaw the plot twist for "Game of Thrones" character Daenerys Targaryen, Bengt R. Holmstrom's Nobel Prize in Economics and even the mass of the Higgs boson particle.

It also predicted coronavirus. In the season four episode "Marge in Chains," it predicted a global flu pandemic known in the show as the “Osaka Flu," and spread by a Japanese factory worker coughing into a package.

That same episode also featured the citizens of Springfield in a desperate search for a cure, demanding one from Springfield’s medical community, only to ignore Dr. Hibbert’s medical advice. While overturning a truck, they unleashed the killer bees inside -- portending the arrival of the Asian Giant Hornet (also known as “Murder Hornets”) into the United States..

Oluebube Prince and 52 others

Thats why i love The simpsons

Again the Simpsons did it.

Have anyone watched Predictive Programming by Joseph Okechukwu? If not, try to and if you need help, I can help get you the YouTube link.

You will understand a lot about what's going on.

The coincidence of these events and the Simpsons is too real for comfort.

Hmm! That's why from day 1, I don't even watch the cartoon cos I no dey understand them. 🤷‍♂️

They predicted coronavirus too in 1993

What all d men of God put together cannot do... Cartoon is doing it.

The producer of the Simpsons knows too much. It's high time he spoke. He as well predicted Corona virus in one of the episode.
Fernandez Omotayo replied · 1 reply
Posted by Endy Edeson