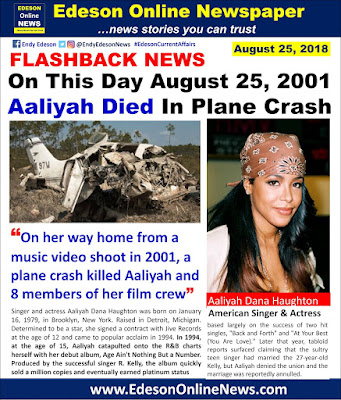 Singer and actress Aaliyah Dana Haughton was born on January 16, 1979, in Brooklyn, New York. Raised in Detroit, Michigan. Film Actor/Film Actress, Actress, Film Actress, Singer (1979–2001). Signed to a recording contract at the age of 12, Aaliyah became an overnight R&B sensation. At the height of her stardom, a fatal plane crash ended her life.
Determined to be a star, she signed a contract with Jive Records at the age of 12 and came to popular acclaim in 1994.

On her way home from a music video shoot in 2001, a plane crash killed Aaliyah and eight members of her film crew. She was 22 years old at the time of her death. In 1994, at the age of 15, Aaliyah catapulted onto the R&B charts herself with her debut album, Age Ain't Nothing But a Number. Produced by the successful singer R. Kelly, the album quickly sold a million copies and eventually earned platinum status based largely
on the success of two hit singles, "Back and Forth" and "At Your Best (You Are Love)." Later that year, tabloid reports surfaced claiming that the sultry teen singer had married the 27-year-old Kelly, but Aaliyah denied the union and the marriage was reportedly annulled.

Charles Joseph and 33 others

may her soul rest in peace. amen.
(you can dust it off n try again, if you try at first n you don't succeed)

#bad_mood_activated! I loved her and wil stil love her even after her death. Aaliyah keep resting dear. The world misses you:::::::::::

Missed her so much till tomorrow. More than a woman.....i love that song.

R Kelly will forever missed her,just as I am.RIP baby